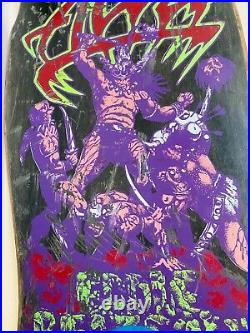 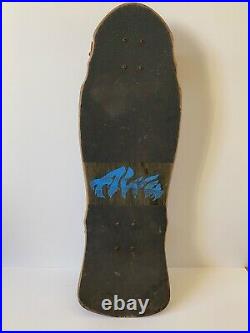 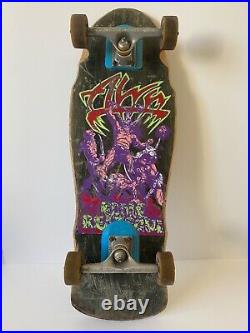 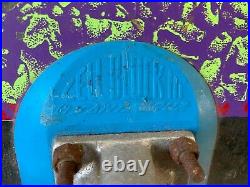 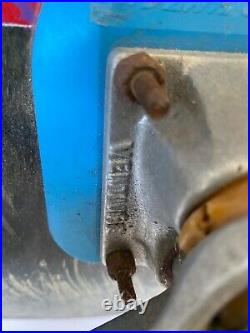 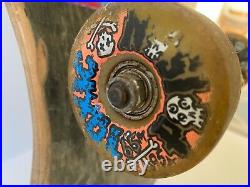 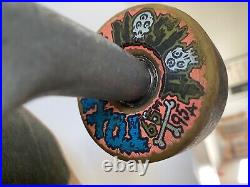 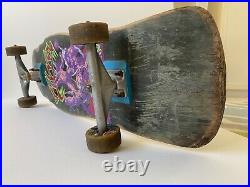 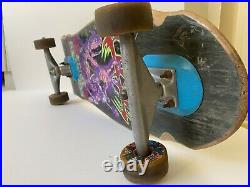 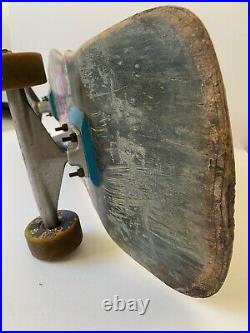 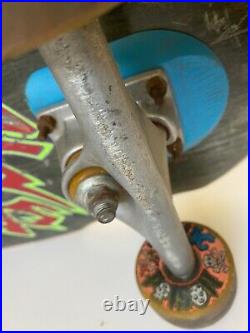 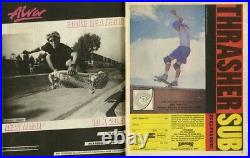 Vintage Extremely Rare. Alva, Venture, Toxic 95A, and Cell Blocks – Ready to ride in your hood. Up for grabs is a vintage complete Eddies Reategui skateboard form 1988. This is 100% authentic and vintage. When shopping please be on the look out for “reissue” or “NOS” (new old school). All my auctions are original 80s gear baby. This set up would cost you. Grab this while you can. I’ll be trickling out my collection over the next month or so. THIS IS NOT NOS OR REISSUE. 1988 Eddie Reategui WARRIOR board from Alva : Very Rare. Good luck finding one of these. A bit of light scraping on the tail, so you know this board was rocked back in the day and the nose is super clean. Neither have holes drilled out for a nose or tail bone. Tracker Trucks: Not very rare, but still vintage and perfect for this board. The scrapes are very light, the king pin didn’t even get scratched. The bolts show rust, but I was easily able to tighten a loose one for you, I applied 3 in 1 oil first. One of the bushings is cracked, if you want to ride hard you’ll want to replace it. These are trucks that will last a lifetime. Cell Blocks by Santa Cruz. They are risers for the trucks, but have the addition of a slope. Kind of similar to the function of a lapper, to get you over the coping and not hung up (Eddy loved vert and pools). For the rest of us, the Cell Blocks and lappers helped us power up a curb before we learned to ollie over them (you know you you are). True to the 80s the wheels were big and tall. These are clearly lightly used, but there is no coning on them and the graphics are mostly in tact. Eddy started with Powell Peralta, but later moved over to Alva because he preferred Tony Alva’s style and lifestyle. Super talented and a super cool dude. Today Eddy still skates and started a skatepark building company called Dagger Skates, here’s a transcript from an interview, you can find it on YouTube. What’s up my name is Edie rata ghee the. Whole school pro skateboarder skin for. Elvis cape horns back from the heyday. Now I hold a safer company called the. Daggers dagger skates starting when I. I’m 45 now and I’m still skating my goal. Was to be a pro skateboarder and I hit. It every day reach that goal finally I. Got sponsor my first sponsor was Paul. Really stoked on POW you know the. Biggest company in the world says a real. Honor to be in this game for those guys. But then I met Tony Alva which Stacey. ProTools a great guy and he was my coach. But Tony Alva was just you know I quit. Powell to skate Brown’s love because of. The lifestyle I look at Tony and Tony. Was in a rock band punk band had. Dreadlocks and he was just he was just. Having fun skating is all about having. Fun and skating so Powell was more of a. Jock thing it was just more. It was just real serious in there from. That camp so I quit skate it problem and. It’s probably built for surprise around. These 20 skate parks and probably a. Hundred maybe even 200 of these little. Mini ramps starting mm so probably 12. Years now I got a call from Dave Duncan. And I was hanging out the sublime Mouse. And I wasn’t skating and Dave Duncan. Called me up and goes hey what are you. Doing and I was like nothing he’s like. Well we’re building skate parks and we. Built the block that was the first skate. Park we built the block started doing. All the X Games gravity games so one day. I just had enough of the big carnival. And I just started doing on my own and I. Call it a gorilla when I started there. Wasn’t very many of us when I went to. High school there’s only one other guy. That skated when I first started skating. 100 bucks at the first place. As Tony hockey’s he took that or. Fishness so usually took that so you. Has told me going off in school you know. Teachers would tell me there’s no future. In you know why do you skate but now. It’s like everybody skates which is. Awesome you go to the skate park and you. Have your cute mom with the little kids. Skating and you know the whole lives. Completely different I never would. Imagine it would have been like this the. Little kids are ripping. Generations insane to watch they’re just. Killing it so I see this wave of. Skateboarding and I’m really stoked on. It turned out and when we’re out on it’s. The item “80s Eddie Reategui Vintage Skateboard Rare Alva, Venture, Toxic 95A, Cell Block” is in sale since Sunday, September 5, 2021. This item is in the category “Sporting Goods\Outdoor Sports\Skateboarding & Longboarding\Vintage”. The seller is “mattkind3″ and is located in Sacramento, California. This item can be shipped to United States.
« Vintage 1980s Powell Peralta Kevin Harris freestyle skateboard deck Mountie orig
Vintage 80s SMA Steve Rocco Think Crime Felony complete skateboard Indy Bullets »