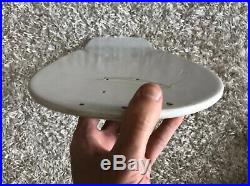 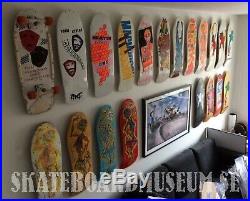 NOS Mint Condition Tony Magnusson deck from Uncle Wiggley Skates 1983. Six ply epoxy and fibreglass construction. Made for this run away swedish kid who came alone to the US at 16 and instantly placed top five with the elite at the time. Not mass produced like a Santa Cruz or Powell-Peralta or what have recently been paid premium for. What is particularly cool about this deck is that its been factory drilled in the nose but never had the rivets typical for UWS boards installed. You can get them at any hardware store and install them yourself if it bothers you or cherish the fact of a unique super rare board thats made it this far without them. Like other legends such as Miller or Blender Tony made some of his first graphics himself including this one. As if it wasnt enough he have since created some of the most well respected skateboard brands of all time such as H-Street and Osiris Shoes, made some legendary videos like Shackle Me Not and Hokus Pokus and acted behind the scenes for more up and coming pros than most could name. While waiting for the so called international skateboarding hall of fame to credit anyone not born in the US Tony was the first inductee of the newly created swedish skateboarding hall of fame in 2019. Last of all dont be fooled by the other number of decks shown (nfs) which has been assembled during 25 or so years of actively collecting his decks. Would not be for sale if it wasnt for the last five months of lockdown. Hit BIN if you got the funds or feel free to make an offer. Thanks and good luck. The item “NOS Mint Uncle Wiggley Tony Magnusson Vintage Skateboard 1983″ is in sale since Tuesday, August 4, 2020. This item is in the category “Sporting Goods\Outdoor Sports\Skateboarding & Longboarding\Vintage”. The seller is “jchandersson” and is located in Kalmar, Sweden. This item can be shipped worldwide.
« Vision psycho stick skateboard Og Nos
Santa Cruz Keith Meek Slasher Reissue Skateboard 10.1 In X 31.13 In »