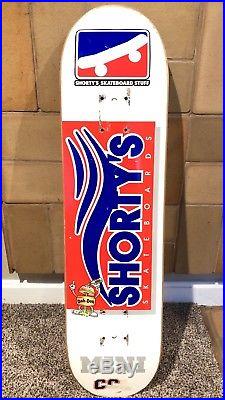 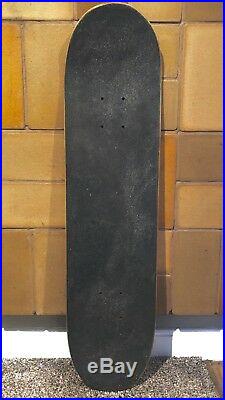 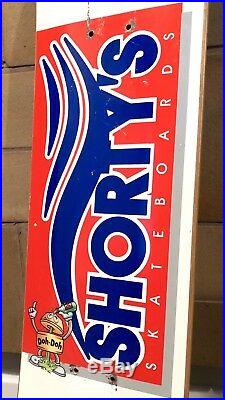 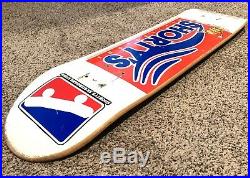 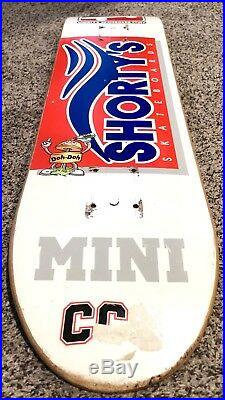 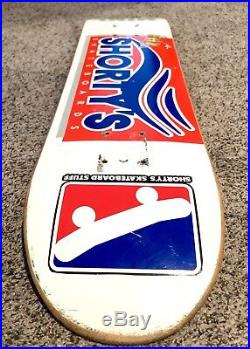 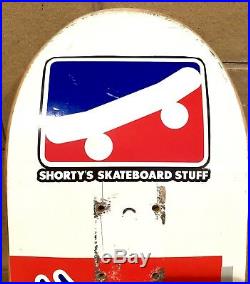 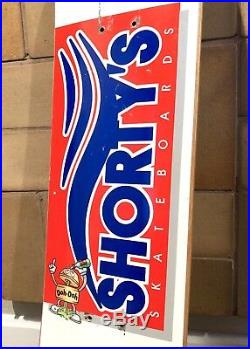 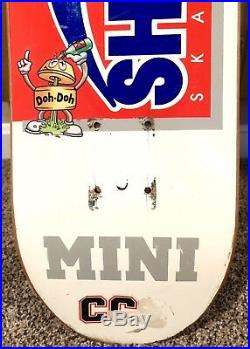 Model: Team Logo – Mini Size Variant. 7.5 x 31.75. This is a genuine 2001 Shortys Deck and NOT a re-issue. In fact this is the only deck size variant from the original 2001 set that did NOT re-issued. The 2014 re-issue series manufactured and extra small size but did not manufacture a deck with mini printed on the bottom. For a used skateboard deck, this is top-notch condition all around. Included with the skateboard is its original Shorty skateboard logo Sticker attached on the nose. The stickers were included with deck inside the shrinkwrap. When it comes to this model gripped up and slightly used, you could not ask for it in better condition unless it was new! Believe it or not it was this size skateboard deck Chad Muska would use for demos and video parts while performing flip tricks and other small tech tricks. I know this for a fact, back in either 1999 or 2000 shorties did a demo in the Massachusetts area and the sketch of where to put it together had multiple of these decks delivered and put aside a few weeks before the event date. At the end of the event all three boards were eventually given out by Muska himself. Alot of people think of many as a childrens skateboard, but that is not the case, it specifically indicates to the length of the board. All of the team riders on shorties rode boards 7.5 inches wide for the most part. Too many people that didnt ask her up in the late 90s and early 2000s this might seem like a very small deck but from someone who is 6 feet tall with a 12 Shoe, you can be the preferred deck size depending on how you skate. The reason Muska, and most likely other team riders would use a smaller board for T-Rex would be a good reason for them to illuminate the branding mini from the 2014 series. Its all making sense now! Up for sale is a 2001 mini Shortys Team logo skateboard deck. The skateboard is in excellent condition and was hardly used. These are not as easy to come by although they made similar rehashes it to thousand 14 they did not re-issue this variation with mini on the tail making this now most likely the most sought after one from the 2001 series. As they used to be. Shortys skateboard decks are highly sought after nowadays and seem to be getting more popular as every day passes. All of these texts are skyrocketing in value as demand increases, considering the condition with this one, you cant go wrong Great investment, good price! This one really is in excellent used condition and displays beautifully. If you look at the photos displaying the side edges of the board you will see there is hardly any knicks, almost no wear n tear on the side whatsoever. The wear on the skateboard would be from where the trucks were previously located. You can see from the nose and tail of the skateboard there was very little use besides riding. I can guarantee you will not be let down with this skateboard deck. Please refer to the pictures for the exact item and its condition. If you have any questions feel free to contact me. The item “Vintage 2001 Shortys Team Skateboard Deck Chad Muska MINI Only Size NOT Reissue” is in sale since Friday, December 28, 2018. This item is in the category “Sporting Goods\Outdoor Sports\Skateboarding & Longboarding\Vintage”. The seller is “smurphytom2018″ and is located in Marshfield, Massachusetts. This item can be shipped to United States, Canada, United Kingdom, Denmark, Romania, Slovakia, Bulgaria, Czech republic, Finland, Hungary, Latvia, Lithuania, Malta, Estonia, Greece, Portugal, Cyprus, Slovenia, Japan, Sweden, South Korea, Taiwan, South africa, Belgium, France, Hong Kong, Ireland, Netherlands, Poland, Spain, Italy, Germany, Austria, Bahamas, Mexico, New Zealand, Philippines, Switzerland, Norway, Ukraine, Croatia, Brazil, Chile, Colombia, Costa rica, Dominican republic, Panama, Trinidad and tobago, Guatemala, El salvador, Honduras, Jamaica, Viet nam, Uruguay.
« Santa Cruz Skateboards -Designarium Natas Panther Autographed Skateboard Deck
BAHNE NOS 27 SLALOM VINTAGE 70s SKATEBOARD DECK »